In 2009, the library of Stephen L. Wolf of New York City, a man described in his New York Times obituary as “the professor of paint,” came to Historic Deerfield as a bequest. 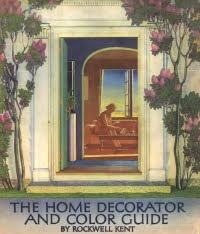 Mr. Wolf operated a Manhattan paint store that his grandfather had founded in the 1860s. He also read widely, and was passionate about his vocation. Over the course of half a century, Stephen Wolf amassed a collection of approx 1,300 books plus numerous pamphlets, trade catalogs and price lists, periodicals, and ephemera dating from the 16th century to the present.

Broadly speaking, Mr. Wolf’s library focuses on color. The topics represented include works on carriage painting, fine art, interior decoration, japanning, color theory, wall painting and wall treatments, dyeing, enameling and glazing, theatrical set design, art restoration, historic preservation, recipe books, the manufacture of varnishes and paint, company histories, architectural pattern books, tools of the trade, gilding and the chemistry of color. Some of the gems in his collection relate to tangential interests, such as a London, 1601 edition of Pliny the Elder’s Historie of the World; Commonly called the Natural Historie, and Mechanick Dialling or; The New Art of Shadows (London, 1769), a treatise on sundials and time measurement by Charles Leadbetter. Other notable titles include Isaac Newton’s Opticks, or, A Treatise of the Reflections, Inflections and Colours of Light (London, 1718), and the rare, earliest printing of John Stalker’s Treatise of Japaning and Varnishing; Being a Compleat Discovery of those Arts (London, 1688), prior to his partnership with George Parker. 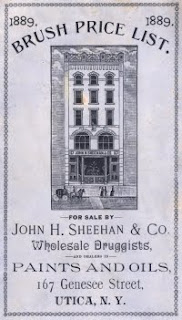 Few institutions, regardless of size, can claim a specialized collection equaling that assembled by Stephen Wolf; the only comparable being the Faber Birren Collection at Yale. Bibliographic records for the Wolf Collection can be searched in our online catalog: http://library.historic-deerfield.org By choosing a call number search and simply entering the letter W, a list of all the Wolf items will appear in call number order. Questions about the collection can be directed to: library@historic-deerfield.org
Posted by NERFC at 10:47 AM No comments:

Do you ever wonder what young scholars are researching and what CHS is doing to help them? Robyn Davis McMillin, a PhD scholar from The University of Oklahoma is a 2011-2012 NERFC fellow – that’s the acronym for New England Regional Fellowship Consortium. Her topic of study is “Science in the American Style: A School of Fashion and Philosophy, of Liberty and People.” What drew her to CHS was the collection, “But it was not just the collections that made my trip so very, very productive. The staff at CHS is unmatched and I send my warmest thanks to everyone who worked with me. You set the bar high, my friends!”

Robyn describes her subject this way: “I move beyond the long shadow cast by that first Scientific American, Benjamin Franklin, and demonstrate that science formed an important element of Anglo-American life throughout the eighteenth and early nineteenth centuries, and not only for a well-educated or well-heeled elite.

Even at the fringes of empire, many Americans managed to participate in the international circulation of scientific goods, ideas and practices. From gentlemen’s cabinets to displays in shops, via traveling curiosity shows and public lectures, through sociable self-improvement associations and philosophical societies, and with the help of books and print ephemera, many people partook of the new sciences. In private and public realms, in commercial as well as social settings, an extensive range of people used science for amusement and education, to signal refinement and status, and to gain entrée to a wide world of ideas.

This vernacular transmission of ideas set the stage for the rise of an authentically American culture of science. At first, engagement with scientific practices helped Americans integrate more fully into the larger metropolitan world of the British Empire and imagine themselves as Britons. Later, it influenced the development of an American consciousness, distinct from and at times in conflict with, that hard-won identity as Anglo-Americans.

My research at CHS was fruitful. There was Thaddeus Leavitt, a storekeeper from Suffield, and an accurate and diligent observer of natural phenomena, who recorded the scientific information he read in magazines. And Hannah Hadassah Hickok, who wrote in her diary of her impatience for an education. What a joy to then discover Geographical Cards much like the ones Hannah played after she had spent days reading in her “Geography book.” Not only manuscripts but museum objects also enhance my argument about the popular reach of science and its multiple roles in helping shape an American identity – like the terrestrial globe crafted from a gourd or the hand-stitched pelisse depicting the life cycle of wheat from seedling to ripened grain. CHS had it all!”
Posted by NERFC at 10:37 AM No comments:

Professor Botting will make a 20-minute presentation at 5:30 p.m.

Reminiscences and Traditions of Boston

Hannah Mather Crocker's Reminiscences and Traditions of Boston (c.1822-1829), a 600-page manuscript history of Boston from the 1620s to the 1820s, preserved at the New England Historic Genealogical Society since 1879, and is at last in print.

Crocker was an important women's rights advocate in the early republic. She was also well-connected in Boston's political circles, as the niece of colonial governor Thomas Hutchinson and the granddaughter of the Rev. Cotton Mather. Her history takes a topographical approach, guiding the reader on a walking tour of the streets, squares, alleys, wharves, and smuggling tunnels of old Boston, providing eye-witness accounts of the political conflicts of the revolutionary era, including the Stamp Act riot of 1765 and the Siege of Boston of 1775-1776. Her focus on the families, homes, and built environment of the city makes the book a great resource for historians of Boston.

With a fresh perspective on early American religious and political history, she shows the connections between church and state in the colonial and provincial eras, the splintering of Congregationalist churches, and the rise of the Baptists, Roman Catholics, and Universalists. Crocker also pays heed to the voices and stories of women, serving as a bridge between the oral traditions and the written historical record.

Eileen Hunt Botting is the author of Family Feuds: Wollstonecraft, Burke, and Rousseau on the Transformation of the Family (SUNY Press, 2006).
Posted by NERFC at 9:19 AM No comments:

Back in 2009 when I applied for a NERFC grant, I thought a week at the
Connecticut Historical Society (CHS) would be enough. Was I ever wrong! Over the past two years, I've been back off and on, and definitely racked up more than a week of research --
and quite a bit more than I expected in terms of research discovery.

The more I crunch comparative donors & accession numbers, the more unusual
the CHS was for the 1840s. Not only did the Society have far more women
donors (comparing raw numbers, roughly 10x; comparing individual women as
a percentage of known donors, roughly 5x) -- and a much higher rate of
donors giving material culture artifacts and antiquities (a quarter of CHS
donors gave such whereas all the other HS for which I have numbers were
under 7%). I suspect the two are connected. The CHS also had notably more
known donors overall (for all save one of the comparables thus far, more
than 2x as many known donors).

I presented part of my research at the Berks this past June.
While this presentation focused on the intersection of preservation and
domestic labor (sewing, cleaning), the CHS comes off pretty well.

I'll also be presenting at the ASCH conference in November, more
specifically exploring why the CHS was so unusual in terms of the number
of women donors -- and the number of donations documenting aspects of
women's lives. The paper is tentatively titled "The Importance of Ladies'
Shoes: Connecticut Historical Society Donors and Donations, 1839-1850."

Thank you very much for your research assistance. I've had a lot of
interesting surprises during the course of my research -- but this is in
many ways the most unexpected and rewarding.