Elisha Porter (1742-1796) is not a household name unlike George Washington or Benedict Arnold. Porter never betrayed his country, nor did he become president. Porter though, like Washington and Arnold, did participate in the early phases of the American Revolution. He was a colonel in the Fourth Hampshire Regiment of Massachusetts. He fought at Bunker Hill, made the acquaintance of George Washington, and soon became a courier for the General. After the fighting in Boston subsided, he was ordered to Canada with his men to assist Benedict Arnold in his siege. Porter later engaged in the battles at Saratoga ,and was selected to escort Burgoyne to Boston after the surrender. After the war shifted to the middle Atlantic and southern states, Porter returned home to Hadley, Massachusetts, where he quietly lived out the rest of his life. Today he is remembered by locals, but only by some. His brief time associating with future legends was either unknown or forgotten.

In late 2017, Historic Deerfield received a gift of the Porter Family Papers. comprising the papers of Elisha and his older brother, Eleazer. Reading through the papers, Elisha’s connections to the Revolutionary War became apparent. There are orders written by George Washington, sending Porter to Canada;  orders from Benedict Arnold directing him to Quebec; orders from General Wooster; a signed commission from John Hancock; and many other documents relating to the war.

These papers encouraged further research into this important chapter in Porter’s life. Here was proof that an ordinary man from a small town in western Massachusetts  witnessed and even participated in, some of the most significant events of the Revolution. The papers provide brand new material for scholars of the Revolution.

As a colonel in the local militia, Porter received militia returns from the neighboring towns in 1775, reporting on the number of able soldiers, weapons, and gunpowder present in each town. These returns were previously unknown. Some towns  provided great detail, listing each man by name, and distinguishing which were “minute men.” These returns give an idea of the preparedness of small towns in the western part of the state were doing prior to the Revolution. Porter, and other military leaders, could determine which towns were best able to defend themselves from attack, and how many men they could count on to join the fight, if needed. The wide-ranging results also showed the diversity in population among the towns of Hampshire County.

The Porter papers add depth to other existing Revolutionary War documents in the library. Many local families fought in the war, some as part of Porter’s regiment. The families of those who left traces of their time in war have passed their diaries, war records, and other documents down, generation to generation. Some of that material has come into the collections at Deerfield. The Porter materials are just the newest and flashiest collection to be added. 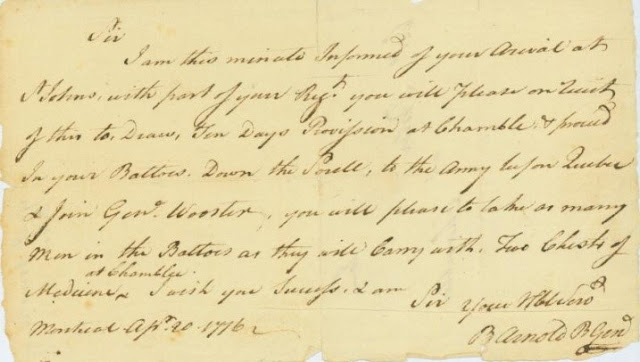 “Sir I am this minute Informed of your Arrival at St Johns, with part of your Regt. you will please on receit of this to, Draw, Ten Days Provission at Chamble, & proceed In your Battoes, Down the Sorell, to the Army before Quebec & join Genl. Wooster. you will please to take as many Men in the Battoes as they will Carry with Two Chests of Medicine at Chamble. I wish you Success, I am Sir Your Hbl servant  B Arnold B Genl.” Montreal, April 20, 1776.