A Native Missionary with Royal Pretensions

The 1704 raid on Deerfield, Massachusetts, during Queen Anne’s War resulted in the death of 57 settlers and militia, the captivity of 112 more, and the destruction of nearly half of the frontier settlement.  Yet beyond tragedy and havoc, the raid created lasting ties between the small village and Native communities in Canada and northern New England who participated in the attack.  The Rev. John Williams, who returned from captivity in November 1706, later described being visited in Deerfield in 1716 by his “Indian master,” meaning captor. Williams’ young daughter, Eunice, remained in Canada where she married and had children, but came back to Deerfield and other nearby towns three times between 1740 and 1761. Visits by Native peoples bound to Deerfield by history and kinship continued into the 1830s.

One visitor, in 1848, was Eunice Williams’s grandson, Eleazer Williams.  Born in 1793 in the French Mohawk community of Kahnawake, little is known of Eleazer’s life until he and a brother were sent to Longmeadow, Massachusetts, where the Rev. Stephen Williams, brother of his grandmother Eunice, served as minister until his death in 1782. The young Williams boys lived with Nathaniel Ely and studied with Ely’s wife, Elizabeth, Rev. Stephen Williams’s daughter. As well as being taught English, the boys learned ‘proper Christianity,’ as opposed to the Catholicism practiced by the Mohawks in Kahnawake.  Eleazer next appeared in Mansfield, Connecticut, where the Elys and others supported him. From there he went on to Moor’s Charity School in Dartmouth, New Hampshire, where he studied with other Native youth. 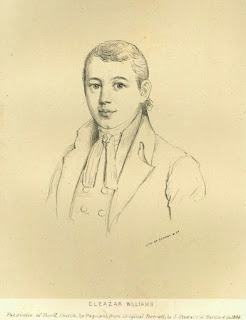 His education completed, Eleazer Williams moved to upstate New York and became an Episcopalian. The young man impressed church leaders who raised money to send him back to Kahnawake, thus beginning his career as a missionary to Native peoples. His initial endeavor enjoyed little success, so at the opening of the War of 1812, Williams accepted a post on the Mohawk reserve at St. Regis, ostensibly to secure the neutrality of Natives who retained some loyalty to the British in Canada.

During the war, Williams wrote two now-rare pamphlets, recently acquired by Historic Deerfield. The first, printed in January 1813 in Burlington, Vermont, by Samuel Mills, is titled Good News to the Iroquois Nation. A Tract on Mans Primitive Rectitude, his Fall, and his Recovery Through Jesus Christ. With the exception of the title page, the text is entirely in Iroquoian. Similarly, a pamphlet subtitled A Spelling-Book in the Language of the Seven Iroquois Nations (Plattsburgh, New York, 1813) consists of tables of words and text in the Iroquoian language. At the close of the war, Williams translated A Caution Against our Common Enemy into Iroquoian. Printed in Albany, New York, in June 1815, the pamphlet warns against the dangers posed by liquor. 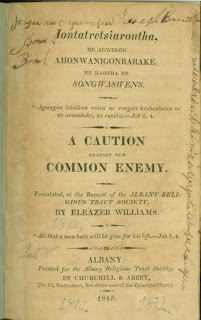 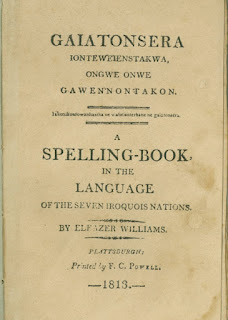 Eleazer Williams went on to write several more pamphlets, all in Iroquoian, did a translation into “Mohawk” of the Book of Common Prayer, issued by the Domestic Committee of the Board of Missions of the Episcopal Church in 1853, and a biography of his father, Thomas Williams, printed in Albany by Joel Munsell after Eleazer’s death. Williams’ assertion that he was the son of Louis XVI and Marie Antoinette, or the “lost Dauphin,” made in the 1840s and promoted in an 1854 book about Williams by John Hanson, appears not to have damaged his relationship with the Episcopal Church. He maintained his claim to the French throne until his death on the Akwesane Mohawk reservation in far northern New York in 1858. Contemporary accounts described him as impoverished and living in squalor among Natives indifferent to his situation. 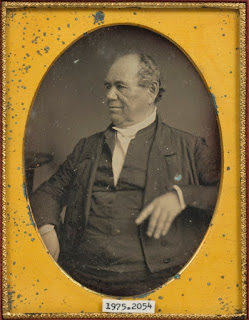 In addition to the above publications and two other pamphlets with Iroquoian titles, Historic Deerfield owns an 1853 biographical essay on Eleazer Williams written by a collateral cousin, Stephen West Williams, and microfilm of the letters and documents in the Eleazer Williams Collection at the Missouri Historical Society.

Note: Michael Ober has written the best modern source on the life of Williams, Professional Indian: The American Odyssey of Eleazer Williams (Univ. of Pennsylvania Press, 2015).