A trove of 19th-century documents, consisting of journals, account books, maps, drawings, and notebooks, has recently been purchased at auction and will be available to researchers at the Memorial Libraries, Deerfield, Massachusetts.  These manuscripts created by Epaphras Hoyt (1765-1850) and his son Arthur (1811-1899), have been in private hands until now and afford a new perspective on Deerfield's history and the influence the Hoyts exerted on wider events.
Born in 1765 in the Old Indian House, the only residence within the stockade to survive the devastating 1704 French and Indian raid on Deerfield, Epaphras Hoyt became a leader in town and county affairs.  Beyond holding numerous civic offices such as postmaster and justice of the peace, he worked as a surveyor, served as a general in the Massachusetts militia, wrote on military theory, the French and Indian wars, and the American Revolution, and contributed to the Medical and Agricultural Register (Boston) and the American Journal of Science (New Haven). His tenure as Sheriff of Franklin Co. is documented in an account book he kept between 1815 and 1831. Copies of speeches he made at anti-Masonic conventions are but one example of his involvement with the political life of western Massachusetts.  Epaphras Hoyt was an avid reader and a keen observer of local and national events - all of which are reflected in his extensive journals. 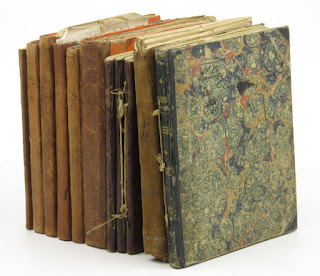 Hoyt played an important role in the education of his nephew, Edward Hitchock (1793-1864), a clergyman, professor and the first Massachusetts state geologist before becoming President of Amherst College. Hoyt's only son, Arthur, followed in his father's footsteps by becoming a talented surveyor and civil engineer. Arthur inherited his father's library of books and manuscripts, and amassed his own substantial library, all of which are recorded in a hand-written catalog that came as part of the papers acquired. The new materials document Arthur's work as an engineer constructing the Rutland & Burlington Railroad, and the Central Massachusetts Railroad, and speak to the early development of regional transportation networks. A previously unknown c. 1830 manuscript map of the village of Deerfield and the contiguous north meadows drawn by Arthur was also purchased.
These materials will join Hoyt papers already in the Memorial Libraries that include surveying notebooks of both Epaphras and Arthur, journals, correspondence, legal documents, and books. Acquisition of these Hoyt documents was made possible in part through the generous support of Margaret E. C. Howland, Ann Lord, and a bequest from the estate of David Proper (1933-2014), former Librarian of the Memorial Libraries. 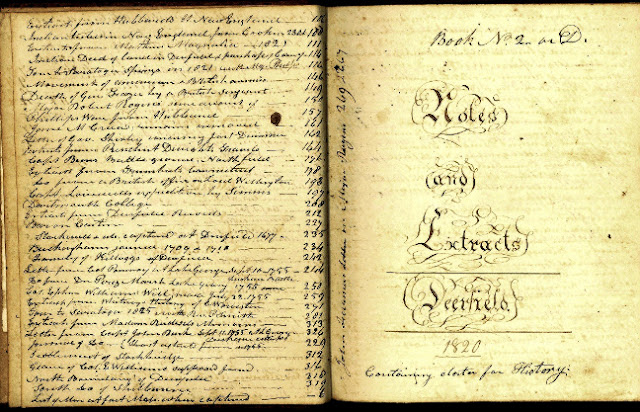 The Memorial Libraries, comprised of the book and manuscript collections of Historic Deerfield and the Pocumtuck Valley Memorial Association, is located at 6 Memorial St., Deerfield, MA. Hours are Tue.-Fri., 9:00-noon, and 1:00-5:00.  Information regarding the collections can be found at:  http://library.historic-deerfield.org, or:  http://deerfield-ma.org/about/library/

Visit  ‘Indifferent to the world’ at the New England Historic Genealogical Society to get an overview of the research done there by NERFC Fellow Peter Walker. Thanks to Scottt Steward for sharing Peter's post about his work at NEHGS.


The CHS is pleased to continue its partnership with the New England Regional Fellowship Consortium (NERFC), and to host visiting scholars whose research is supported by grants from NERFC. In December of 2017, two NERFC scholars shared their work during brown-bag lunches with CHS members and staff.

Shira Lurie, Doctoral Candidate at the University of Virginia, presented her project Politics at the Poles: Liberty Poles and the Popular Struggle for the New Republic. She explained that during the 1790s, an old way of protest in American politics re-emerged. Federalists, who dominated New England, were cast by Republicans as autocratic elitists who ran roughshod over the Republican minority. In protest, the Republicans revived the Revolutionary-era practice of erecting liberty poles in town squares. The poles stood as symbols of opposition to tyranny. Federalists denounced this as an illegitimate form of political expression. In their view, the vote and the legislative process were the only proper way to express dissent. They worried that Republican opposition would undermine federal authority and drag the country back into the chaos of the 1780s. Local Federalists tore down the poles, leading to violence, acerbic press coverage, and legal action.

Kathrinne Duffy (below), doctoral candidate at Brown University, is working on a project entitled Skulls, Selves, and Showmanship: Itinerant Phrenologists in Nineteenth-Century America. Phrenology was a controversial and influential science in the mid-1800s. Proponents believed that the shape of one’s cranium revealed one’s character — a materialist conception of the self that gave rise to novel modes of introspection and observation. To promote their science of the mind, practical phrenologists traveled from town to town, offering lectures and examinations. Ms. Duffy sketched the backgrounds of several prominent phrenologists, and the reaction of audiences, ranging from credulity to skepticism.

Both presentations have inspired future displays at the CHS. Ms. Lurie’s research prompted the CHS Collections staff to plan a display about liberty poles and their depiction in early America; we have examples of them popping up on items as varied as swords and currency. Similarly, the CHS will mount a display of ephemera related to phrenology in the 1800s. Look for these displays at the CHS this year. Both displays will be mounted in our Nawrot History Nook, just outside the Waterman Research Center.

Please visit chs.org/events to learn about upcoming NERFC scholar presentations, or sign up to be notified of future events via email.