The Mary Baker Eddy Library (MBEL) houses the organizational records of the church, as well as materials that document the work of CSPS. These include an extensive collection of pamphlets, periodicals, articles, and related materials from a vast assortment of publishers and sources. These comprise the Non-CSPS Publications and Serials Collection.

In addition to those writings by church members, numerous items in the Non-CSPS Collection, both supportive and critical, were written by and for people who were not Christian Scientists. Prominent supportive articles present in the collection include those written by the Progressive Era editor and journalist B. O. Flower and published in his magazines The Arena and Twentieth Century Magazine. Critical publications include the entire run of a McClure’s Magazine serial biography titled “Mary Baker G. Eddy: The Story of Her Life, and the History of Christian Science,” attributed to Georgine Milmine. Also present are numerous theological tracts and articles arguing against Christian Science from an orthodox Christian viewpoint.

Additional items in the collection include diverse cultural investigations of Christian Science, such as an article in the November 1950 issue of Ebony magazine about Christian Science in African-American communities, as well as architectural accounts of Christian Science churches. Materials on Eddy include traditional profiles of her role as a prominent woman in American history, as well as more eclectic materials such as a page featuring her in a book of paper dolls, by artist Tom Tierney, that highlights “Famous American Women.”

Materials not directly related to Christian Science cover themes that include general religious topics, social issues, current events, and history. These often give context to Eddy’s life and the historical context of Christian Science. For example, legal publications on religion in schools, the operation of parochial schools, and legislation affecting medical freedom would all have been of potential interest to Christian Scientists without necessarily applying directly to their individual situations. While the relevance of these materials to prior custodians of historical materials at the church has been lost, their presence in a collection that has been maintained throughout the twentieth century nevertheless helps to establish connections with areas of study relevant to the MBEL’s collecting criteria.
The bulk of the materials in the Non-CSPS Collection date from 1880 to 2000 and are published in English. Some exist in other languages, particularly French and German, and represent the growing international presence of a religion first established in America. Materials were largely published in the United States, Canada, Great Britain, Ireland, Australia, and New Zealand. The collection developed largely out of materials sent to regional church representatives, such as Christian Science Committees on Publication, or bodies created to respond to public misconceptions of Christian Science. It represents a collaborative collecting project intended to develop an understanding of a complex cultural institution.

For a movement and institution that has been so prominently in the public eye as Christian Science, it is necessary to understand public perception and media response to the church movement as a whole. The Non-CSPS Collection is a vital resource that can help researchers gain a multifaceted understanding of Christian Science and its place in the wider contexts of religious and social history, as well as the role of media in American life.

As new members of the consortium, the Northeastern University Archives and Special Collections will be introducing you to different components of our collections, which are comprised of records of Boston’s social justice and organizing history in African American, Latinx, LGBTQA, Asian American, and other communities. As well as community newspapers such as the Boston Phoenix, East Boston Community News, Sampan, and the subject of the blog: the Boston Globe.

In the basement of Snell Library at the Northeastern University Archives and Special Collections resides the Boston Globe Library Collection. 4,376 boxes comprised of over a million photographs, over five million negatives of unprinted photographs, and 119 years of newspaper clippings from the Globe, the Boston Herald, the Boston Phoenix and other area and national newspapers. Today, this vast collection of visual and textual resources is open to all researchers, whose interests may range widely, from Red Sox scores and legislative debates to Melnea Cass’s relentless pursuit of racial and economic justice. 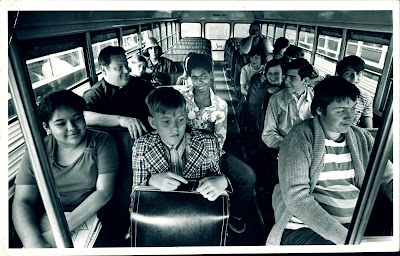 The collection of the Boston Globe Library is broken down into four parts: Newspaper Clippings, Microfilm, Print Photographs, and Negative Photographs. While researchers can research within each part individually, all the components of the collection can complement the different approaches to a research question. For instance, those interested in the history of school desegregation can use the print photographs to study how the first day of busing was covered visually in the Boston Globe, the negative photographs to see all of the shots the photographers took, including the ones that were published, and use the newspaper clippings to research the range of reporting on the Boston Public Schools, desegregation, and the Boston School Committee. 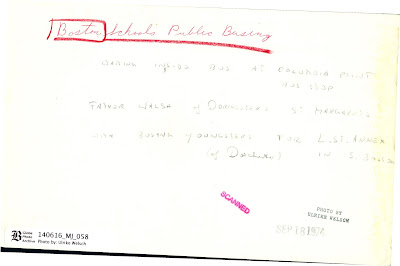 In a series of upcoming posts we’ll share the many ways that research and rich experiential learning can be accomplished using the Boston Globe Library Collection. To find out more in the meantime, visit the finding aid here.

If you have any questions or would like to begin researching in the Boston Globe Library Collection please contact us at archives@northeastern.edu or 617-373-2351.

This year marks the centennial of the passage of the 19th Amendment, which Rhode Island ratified on January 6, 1920. Newporter Maud Howe Elliott (1854-1948) gave support to the Rhode Island branch of the movement and helped form the Woman’s Suffrage Association of Newport County. Locally she campaigned for Rhode Island legislation to legalize women's right to vote, and helped to manage membership, accounting, and selection of key personnel in the association itself. She also traveled around the country, participating in lecture circuits to help build interest in fledgling suffragist societies.

Maud Howe Elliott was a social and political activist, Pulitzer prize-winning author, and founder of the Newport Art Association. She was the daughter of social activists Julia Ward Howe and Samuel Gridley Howe whose activism was instrumental in shaping Elliott's life as she went on to influence society and politics in Rhode Island and America at-large.

Elliott was also involved in the formation and development of the Rhode Island Progressive Party. The Progressive Party was founded by Theodore Roosevelt after he lost the Republican nomination in 1912. The party’s platform included tighter federal regulations on industry and programs to benefit the poor and working class. Additionally, the Progressive Party supported enfranchising women, which encouraged many suffragists to join the party.


The Newport Historical Society holds a collection of Maud Howe Elliott’s papers that largely concern her involvement in the women’s suffrage movement and Progressive Party. Access a finding aid here: https://collections.newporthistory.org/Detail/collections/321
Posted by NERFC at 8:57 AM No comments: